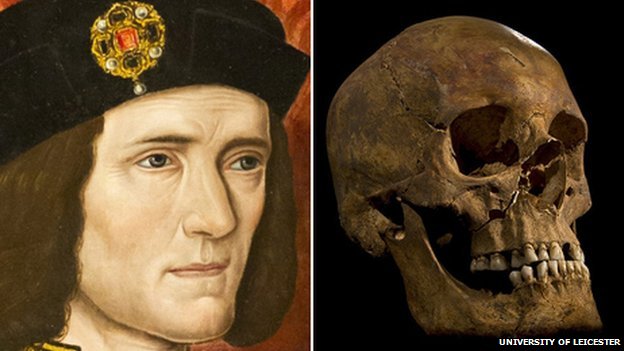 Analysis of DNA from Richard III has thrown up a surprise: evidence of infidelity in his family tree.
Scientists who studied genetic material from remains found in a Leicester car park say the finding might have profound historical implications.
Depending on where in the family tree it occurred, it could cast doubt on the Tudor claim to the English throne or, indeed, on Richard's.
The study is published in the journal Nature Communications.
Read the rest of this article...
Posted by David Beard MA, FSA, FSA Scot at 09:09 When the body of Richard III was discovered in a car park in Leicester in 2012 archaeologists knew it was a momentous find.
But little did they realise that it might expose the skeletons in the cupboard of the British aristocracy, and even call into question the bloodline of the Royal family.
In order to prove that the skeleton really was Richard III, scientists needed to take a DNA sample and match it to his descendants.
Genetic testing through his maternal DNA proved conclusively that the body was the King. However, when they checked the male line they discovered something odd. The DNA did not match showing that at some point in history an adulterous affair had broken the paternal chain.
Read the rest of this article...
Posted by David Beard MA, FSA, FSA Scot at 09:07 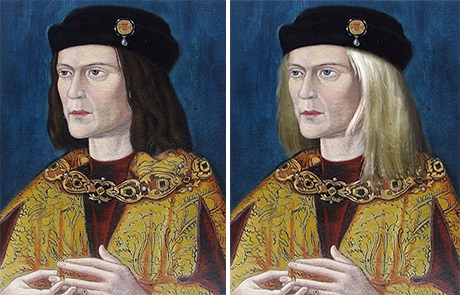 The bones of the king under the car park have delivered further shocks, 527 years after his death and more than two years after his remains were discovered in Leicester: Richard III was a blue-eyed blond, and the present Queen may not be descended from John of Gaunt and Edward III, the lineage on which the Tudor claim to the throne originated.
Five anonymous living donors, all members of the extended family of the present Duke of Beaufort, who claim descent from both the Plantagenets and Tudors through the children of John of Gaunt, gave DNA samples which should have matched Y chromosomes extracted from Richard’s bones. But none did.
Read the rest of this article...
Posted by David Beard MA, FSA, FSA Scot at 09:03

The 2015 EMAS Easter Study Tour is to the North of Scotland, including one day on the Isle of Skye.

We will travel from London Embankment by coach, staying overnight at Carlisle on the 2nd and 7th April.

We shall be based at a hotel in Inverness, which is a very good central point from which to explore the region.

The itinerary includes a wide range of prehistoric and medieval sites, including some of the famous Pictish symbol stones.

click here to visit the
Archaeolgy in Europe Home page

to visit our
Medieval Warfare
Site of the Day

David Beard MA, FSA, FSA Scot
I am a freelance archaeologist and Fellow of the Society of Antiquaries and the Society of Antiquaries of Scotland specializing in the medieval period. I have worked as a field archaeologist for the Department of Environment (Northern Ireland) and the Museum of London. I have been involved in continuing education for many years and have taught for the University of Oxford Department for Continuing Education (OUDCE) and the Universities of London, Essex, Ulster, and the London College of the University of Notre Dame, and I was the Archaeological Consultant for Southwark Cathedral. I am the author of and tutor for an OUDCE online course on the Vikings, and the Programme Director and Academic Director for the Oxford Experience Summer School.